Sylvain put the phone down gently and called Manuela, her trusted Spanish maid.

“Two guests for the weekend, arriving this afternoon.” 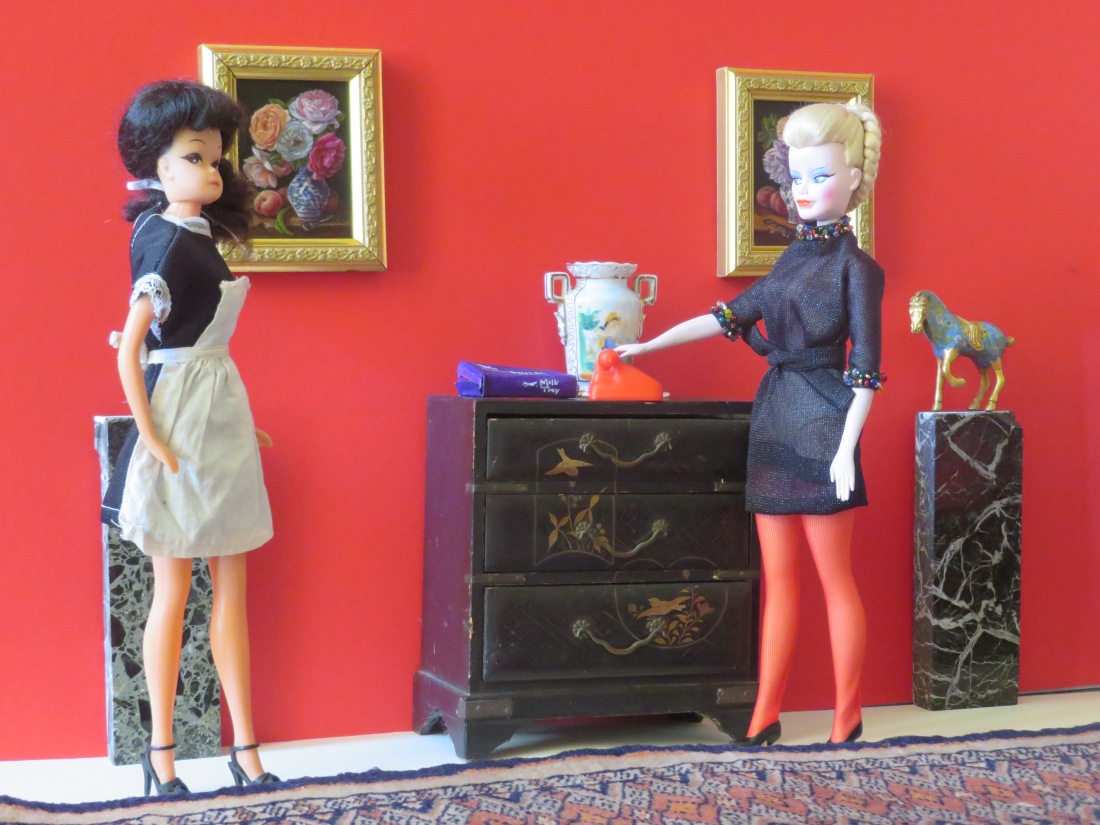 “Run my bath, Manuela, with rose petals and perfume.”

“Si señora.” She flashed her Spanish eyes with what could be taken as annoyance?

Relishing the gorgeous luxury of her marble clad bath chamber, Sylvain basked in steamy solitude before her guests arrived.

Meanwhile on a quite country lane. Sindy’s car had coughed, spluttered and halted abruptly. She tried everything to get it started (except fill the empty petrol tank) She was miles away from the nearest phone box, Sindy was stranded in the deserted back lanes and getting a little bit scared.

Frantically she waved at the next passing car, close to tears she sobbed,

“Please help me, I’ve broken down!” 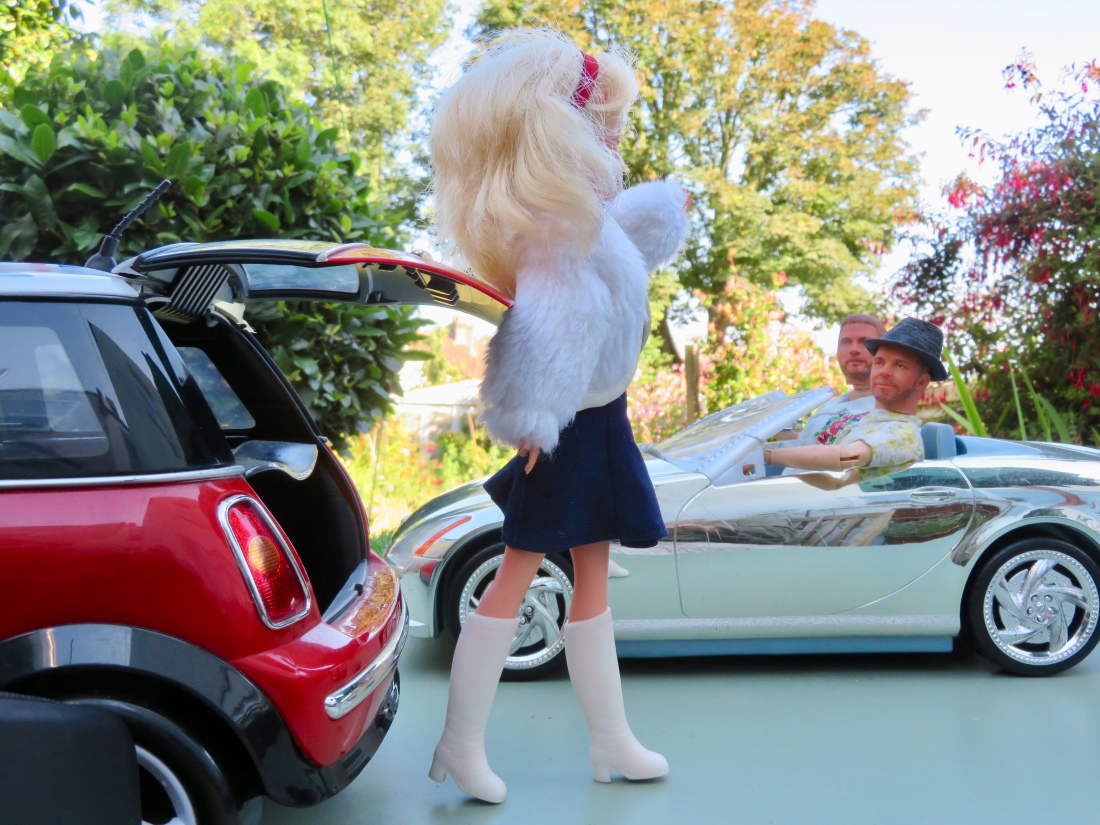 Luckily they were NOT serial killers (?) just a couple of chaps ready to help a distressed damsel.

“Hop in sweetie, we’ll take you to a phone.”

Flustered, Sindy was suddenly aware they were driving a very shiny, expensive two seater sports car so it was a very tight squeeze, Sindy immediatly felt safe with these handsome ( and rich) strangers.

Sylvain took her aperitif in the west wing.

“Los guests have arrived señora.” Manuela was on front door duty as well as waitress, chambermaid and general dogsbody.

“Good, show them in.” She said impatiently, before she even had a chance to pick out her favourite chocolates.

“Julian darling, it’s been so long, you are as handsome as ever.” As they kissed twice in the continental fashion, complementing each other in affectionate gestures.

“Sylvain, the one and only true beauty, we have so much to catch up on.”

“Tristan, I’ve heard all about your adventures, such a hero, when is the book published?”

“Sylvain, I haven’t started writing it yet, ha ha, you must help me decide on the title.”

“Ah, I see you have brought your tennis racket, we shall play tomorrow…and this time I will beat you!”

“Not before I beat you first young lady!” As he tapped it against her posteria in a overly familiar fashion, amongst jovial laughter all round.

“We found this poor thing all alone and stranded in the middle of nowhere, her cars broken down.”

“So….no one knows where you are, no one at all?” Sylvain raised an interested eyebrow as she appraised the pretty blonde girl.

“Er, no…er, please may I use your phone, I must get a machanic.”

The three pairs of eyes devoured her innocent freshness ( were evil intensions afoot?)

Manuela dialed a local garage ( or thats what she said she was doing) and spoke so fast Sindy could hardly understand her, although she didn’t actually mention her car, something about ‘sacrificio’.

“Its a mini.” Sindy added, trying to be helpful, just as the maid slammed the telephone down abruptly.

“When are they coming?”

“Later, pronto, mañana…..” She shrugged, “They are veerry busy.”

Sindy was a little disappointed until she looked around at the luxury and refinement of her surroundings, she’d never been in such a beautiful house before.

Sly winks and nods were exchanged, unbeknown to Sindy the handsome duo had unscrupulous plans for our sweet heroine.

*We all trust in strangers at times of emergency, hoping they are upstanding citizens 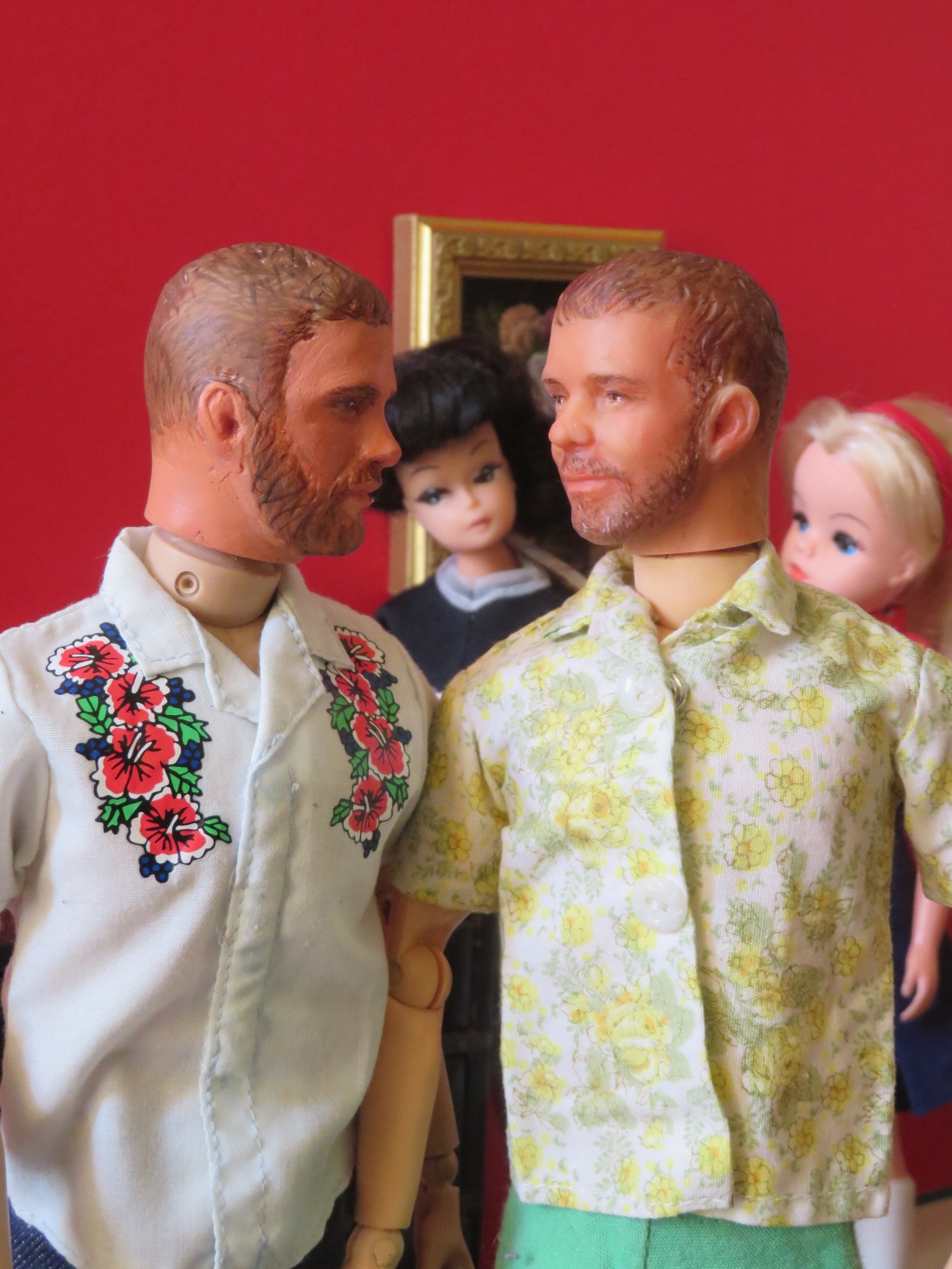 Manuela led the expected guests with their luggage to their room, leaving the unexpected one sharing some soft centres with the hostess.

“So do you live here all alone? ” Sindy scoffed between small talk.

“My husbands have all …gone.” Sylvain replied casually.

“Husbands? How many have you had?”

“Six, the first was a Swiss General but I was only 14, then the Russian Count, followed by the Maharajah – such a sweet man but his children …. were difficult.” Sylvain had a far away look as she recalled her past life.

“Oh!” Sindy was easily impressed and her curiosity was whetted, “Where…are they….did you divorce?

“All dead, I am a widow.” Said Sylvain abruptly as she elegantly rose and left the room. 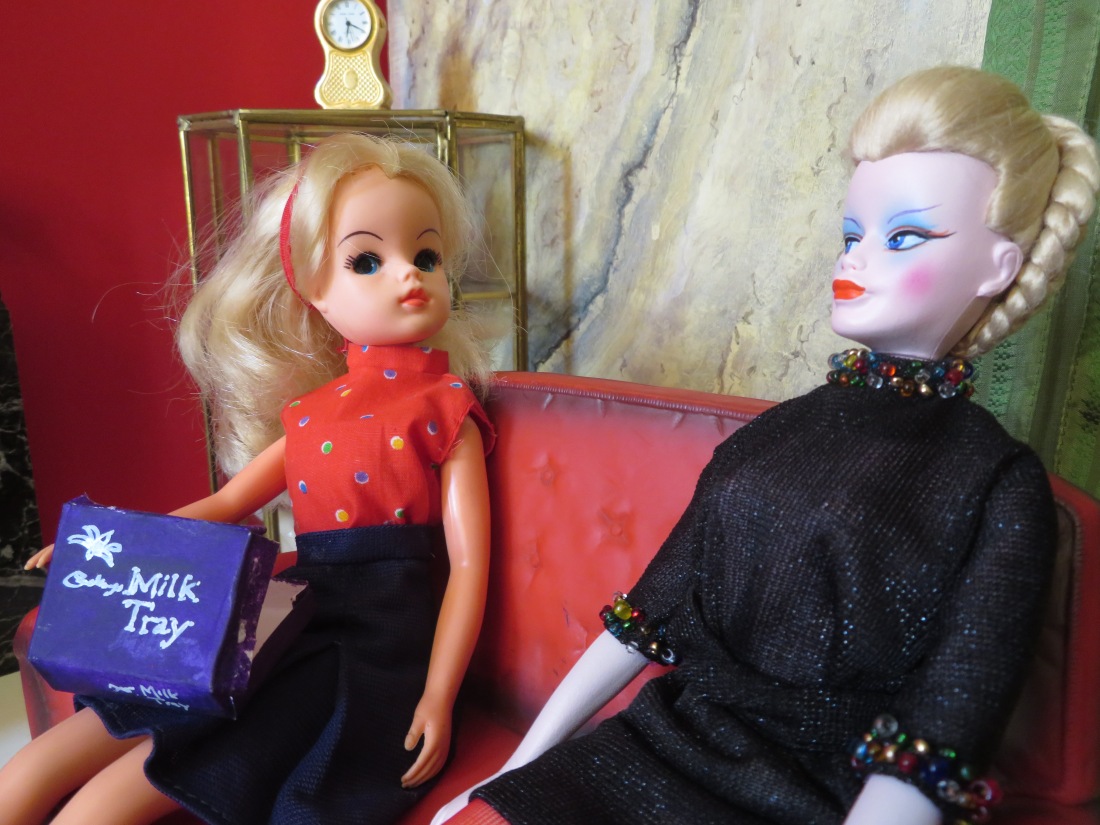 Immediatly Manuela entered with refreshments, Sindy didn’t usually drink wine in the afternoon but it would be rude to refuse, wouldn’t it?

She was getting quite comfortable, pampered in the lap of grandiose luxury.

Smooth talking Tristan kept her company and shared some chocolates so she didn’t feel too guilty finishing off the whole box. He was so handsome, Sindy was seriously falling for his charming ways, thrilling in this real life adventure just like the Mills & Boon books she loved to read.

“Tris, will you come and play with my balls?” called Julian, who seemed keen to rescue his companion from pretty Sindy’s charming and innocent clutches. 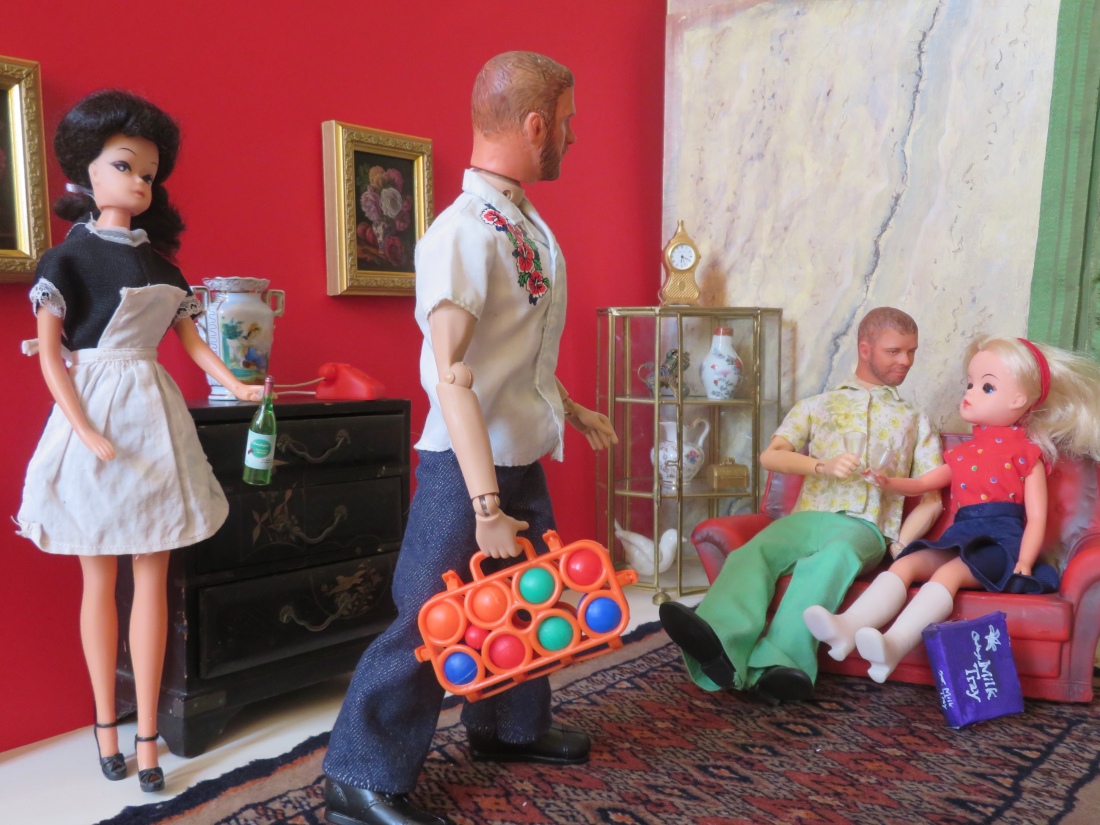 “I’d love a game of boules with you Julian.” Tris jumped up to follow his games partner outside just as Manuela refilled Sindy’s glass, she had lost count how many times she’d emptied it, who was keeping score anyway? 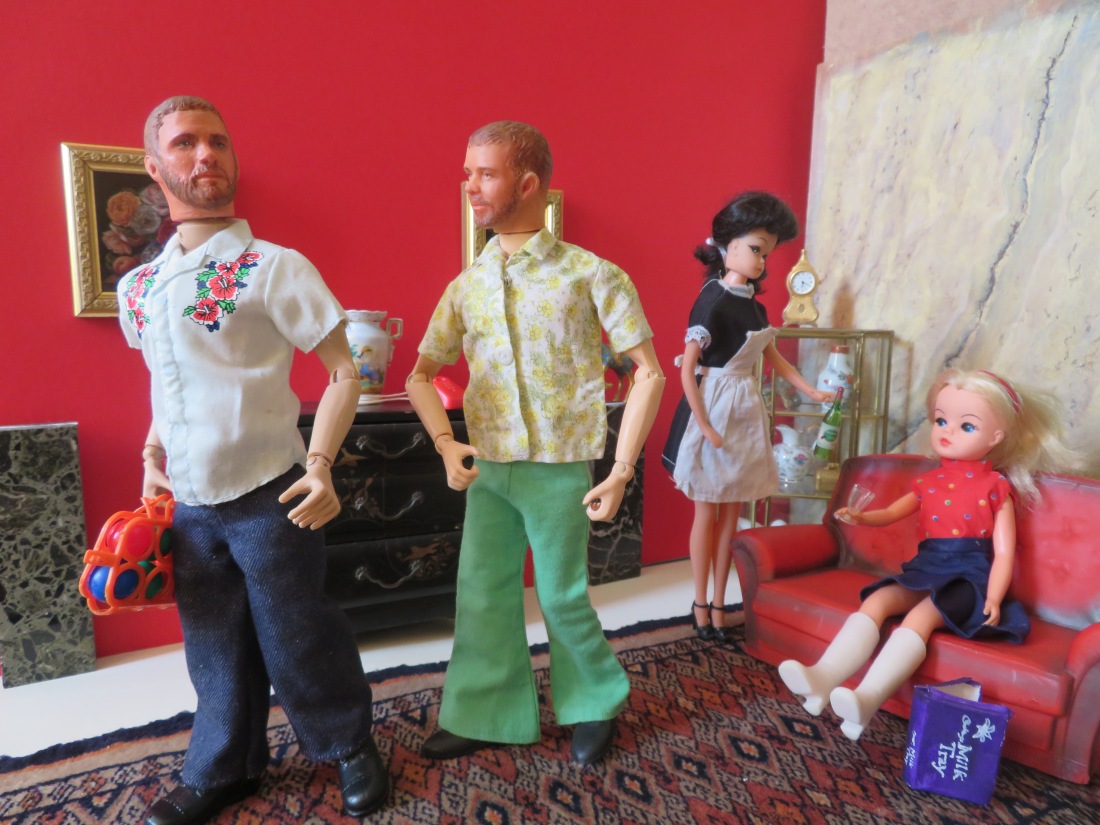 Dusting the surfaces in the garden room, all semed quiet in the house, Manuela had seen many strange sights and odd goings ons, usually with willing participants; this time was different and she was having second thoughts, a crisis of conscience perhaps?

“Ah there you are, you’re not trying to escape again, tee tee.” The now tipsy Sindy pounced (or staggered) over to this handsome smiling young man, grabbing his arm to steady herself, and stroking him affectionately.

“I want to thank you so much for rescuing me, you were like a knight in a shining sportscar, ” she gushed, “Maybe we could go out together and get to know each other better?” Sindy had got some dutch courage from somewhere and her bold advances took him by surprise.

“Oh sweetie, ” he gently untwined her pawing hands, “I’m taken and haven’t you got a boyfriend, Barry, you told me all about him earlier.”

Sindy had forgotten that bit and stood crestfallen and a little bit fuzzy headed as he made his speedy escape back to the sunny lawn and Julian’s ball game.

What a fool she’d made of herself, her romance novels never ended like this, he should have held her in his strong arms and whisked her onto his yacht after a quick marriage at Gretner Green.

Drunken Sindy had tears whelling up in her eyes. 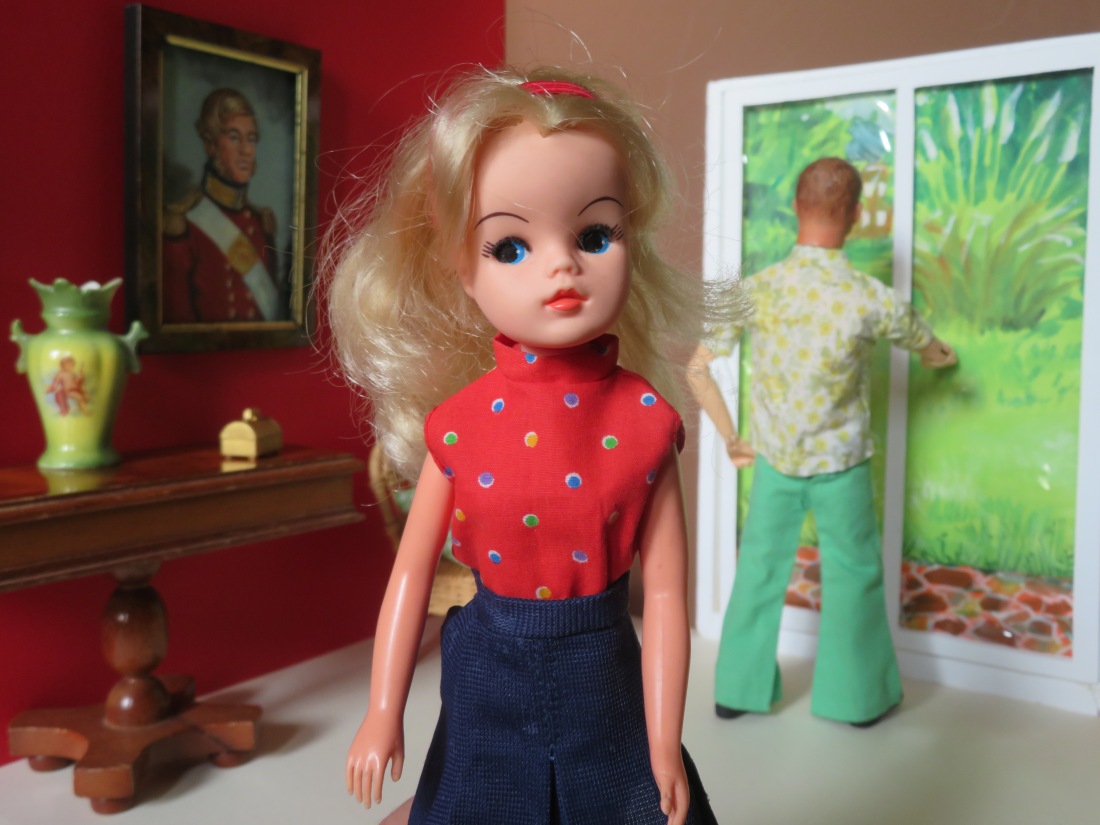 Manuela tutted from the dark corner of the large room and muttered in her native tongue about the folly of youth.

Handing her the ( slightly soiled) duster to dab her tears, “Telephone this Barry, he take you home, you shouldn’t be here after dark, it’s…..dangerous.”

Half an hour later, the familiar rumble of a motorbike was heard , Sindy grabbed her coat and ran outside at full pelt.

“What’s up Sind? We were all worried when you didn’t show up, even your mum called me!”

Later by the pool.

“What happened to that girl?”

“She has gone señor.”

“Shame, we could of had some fun with that one.” They laughed while handling their fruity cocktails.

Sunday night with a cold beer, some praline chocolate cake and all her house guests now departed…

Sylvain puts her tired feet up and dreams of the crisp Alpine air and the holey cheese of her childhood home.

And the moral of this story is – always tell your mummy where you are going.

This is the second SindySnap.wordpress Photo Story site as the original one is full up. Follow the continuing adventures of vintage Sindy and her chums in their quest for fun and excitement, set in the 70s. Follow the SindySnap facebook page for all the latest news. View all posts by SindySnap2